Yes. Definitely time for an update. It’s been WAY too long and I apologize. Blogging is a lot more work than I anticipated and it’s so easy to say “Ahh, I’ll just write it next week.” Well it’s been 6 weeks and it’s time. I’ll regret this 6 week lapse in posts a year from now when Sarah and I want to live our time again through the posts. Oh well, it’s my own fault.

Anyways! Time is winding down… It’s scary. It’s just amazing how fast the time has gone. Where did this year go? Amongst delicious food and fantastic experiences, it’s been filled with lots of visitors! We added to that list two weeks ago with Sarah’s younger brother Ben and his girlfriend Jenny. We’ve had just about everyone from our families (sorry Luke!) visit us over the past year and Ben and Jenny didn’t want to miss out. Originally, they weren’t sure if they could make it with the timing of school letting out and their summer jobs, but what the hay? They couldn’t pass up the opportunity to visit one of the most BA countries in the world. So after 32 hours of missing flights, changing airports, and long layovers, they arrived in the hot and humid country of Taiwan. Let the fun begin.

I don’t need to go into detail about the usual itinerary for our visitors…I think I’ve beaten that to death in the previous posts. What we DO like to do with each pack of visitors is to do something unique and different from the rest. We knew Ben and Jenny were coming off a travel high with their recent interim trip to the Galapagos Islands in Ecuador, so we had to get them out into the beautiful mountains of Eastern Taiwan in Yilan/Hualien.

Another one of my favorite things to do with the visitors is to get them into a situation that makes them feel uncomfortable…where they feel like a fish out of water. Taipei is easy. Sure, it is much different than the USA, but it is an international city. There are Starbucks and McDonald’s at almost every MRT stop. Pizza Hut and Dominoes are also littered around the city. It’s a culture shock arriving in Taipei, but you really feel that shock once you get out of Taipei, the way of life outside the big city. That is when you feel, “Wow. I am a long ways from home.” That feeling is what is so rewarding when traveling. Experiencing a way of life vastly different from the one you are accustomed to.

We started out the weekend taking the local train to Wai Ao beach in Yilan County. It’s a super quiet coastal “town.” It was super quiet that weekend, almost like a ghost town. Ben and Jenny were a little wide eyed, trying to wrap their heads around their new surroundings. We stayed in a nice little hostel on the coast as our headquarters for exploring the surrounding area.

We arrived early and decided to take a short hike in the mountains as we waited for our room to be prepared. Quick fact: weather in Taiwan can change drastically within minutes. Sunshine one minute, torrential downpour the next. We set out on the hike with sunshine and within minutes…torrential downpour. We were literally soaked to the core. It was a blast..plus, good memories happen when things don’t always go as planned. 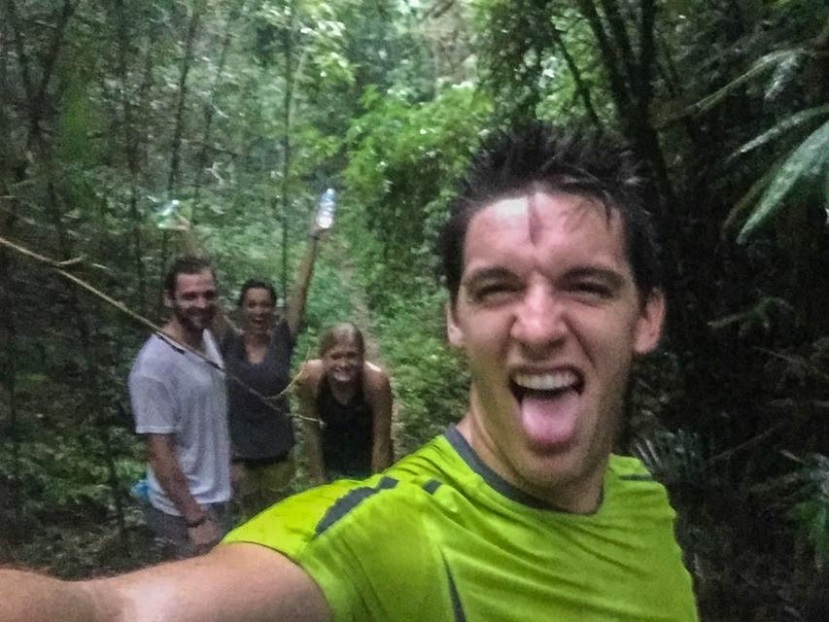 The weather stunk the rest of the day. We decided to just bomb around in the ocean with what we were wearing on the mountain. Might as well get it clean while swimming in the sea. We ended the night with a couple brews huddled under an umbrella playing euchre. I was also able to play a few tunes on the hostel’s guitar.

The next day was why we came to Yilan in the first place. Sarah and I had heard about a super remote hike to an enormous waterfall. Can’t beat that! The directions were very obscure and went a little something like, “take a left at the big rock,” or “continue down until you see an acorn.” Haha, maybe not the acorn part, but you get what I mean. We traveled a few hours out of Taipei hoping the waterfall actually existed and that the directions would get us there. Anyone we talked to had never even heard of the waterfall we were trying to find.

The start of the trailhead was actually at one of the most famous waterfall attractions in Jiaoxi, Taiwan. We were really hoping we didn’t get suckered into going all the way there just to climb a million man made steps to see a super touristy attraction. Luckily for us, the directions told us to, “take a left at the big rock, and continue the opposite direction.” Good, we wanted to be as far away from that trap as possible. We continued along the path and we were soon greeted with the jungle. All of a sudden, we were surrounded by nothing but greenery and spectacular views of the mountains surrounding us.

We finally came upon the part Ben and I had been looking forward to…river trekking. The trail stopped at the river and the rest was up to us. Time to get the feet wet and traverse up the river. Our first stop along the river was a small waterfall descending into a little watering hole. We had fun jumping in it from the rocks and cooling off a bit. 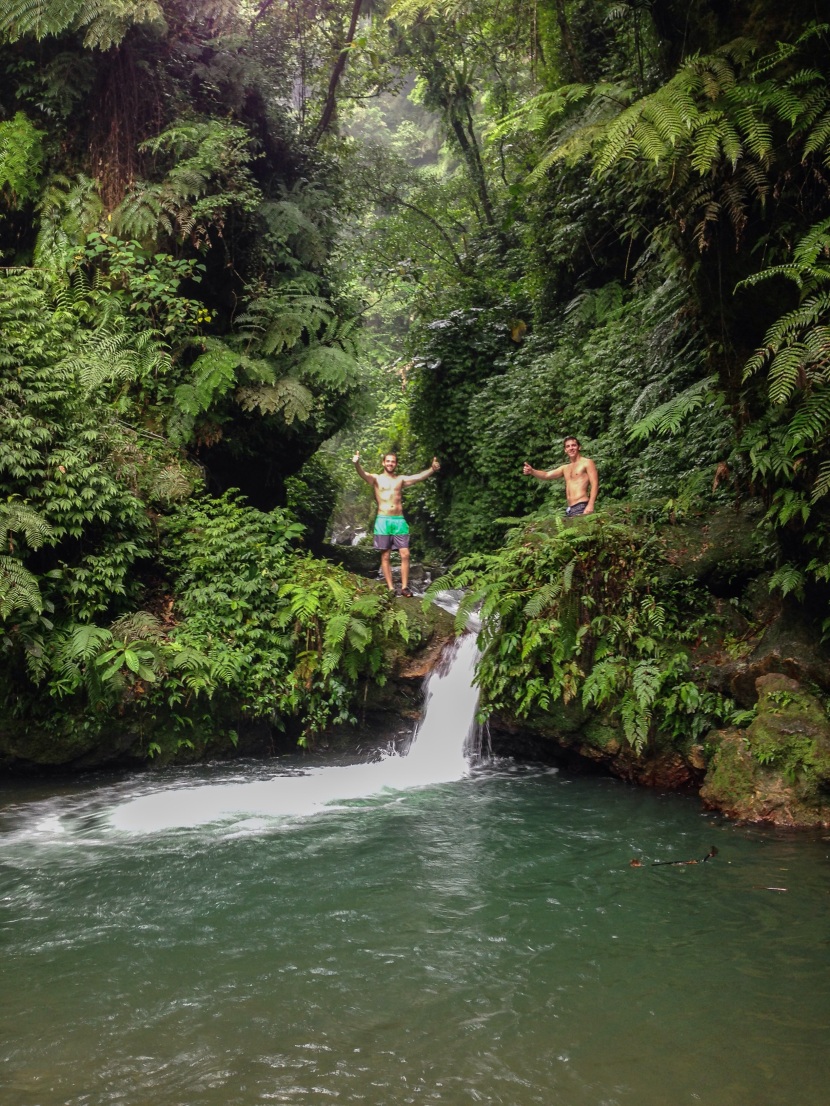 We continued our river trek trying not to totally slip and fall and finally came upon Yuimeikang Falls. Wow! It was one of the coolest waterfalls I had ever seen and we could literally stand in it! We were all pretty awestruck. We had no idea what the waterfall would be like, so we were more than overjoyed. It was absolutely amazing and we all agreed it was one of the best hikes we had ever been on. Totally worth the trip! 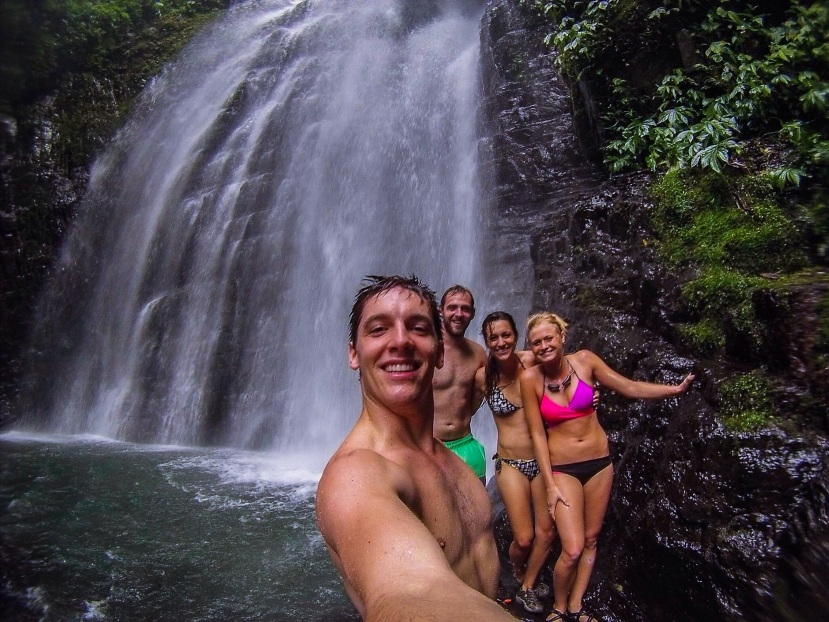 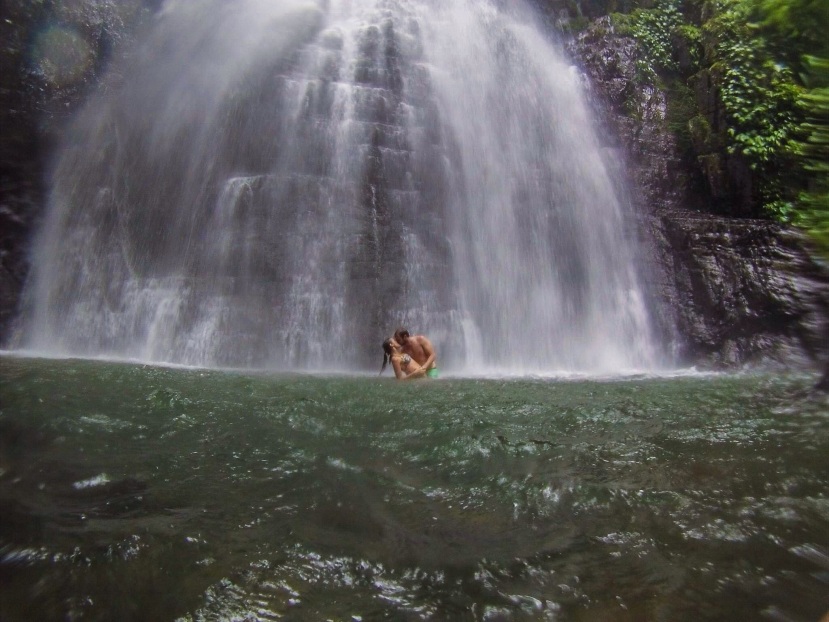 It was a fun week for all of us. We were never in high school with Ben or Jenny, so we had never had a lot of time with just the two of them. It was a great week of just spending time with each other and truly getting to know them. We spent the week checking out the Taipei 101, touring the Chiang Kai Shek Memorial Hall, walking through Dahu Park, cycling along the Neihu riverside, and climbing Tiger Mountain.

Our favorite night of the week was going to one of our favorite restaurants. Sarah and I met some guys at this restaurant a while ago and we have been hanging out with them ever since. They wanted to give us what they call, “a great memory” of Taiwan. We were treated to a table filled to the max with any and every dish you could possibly think of and plenty of Taiwan beer to go around. It was such a fun night introducing Ben and Jenny to the hospitality of the Taiwanese people and of course, introducing them to some of our good friends in Taiwan. 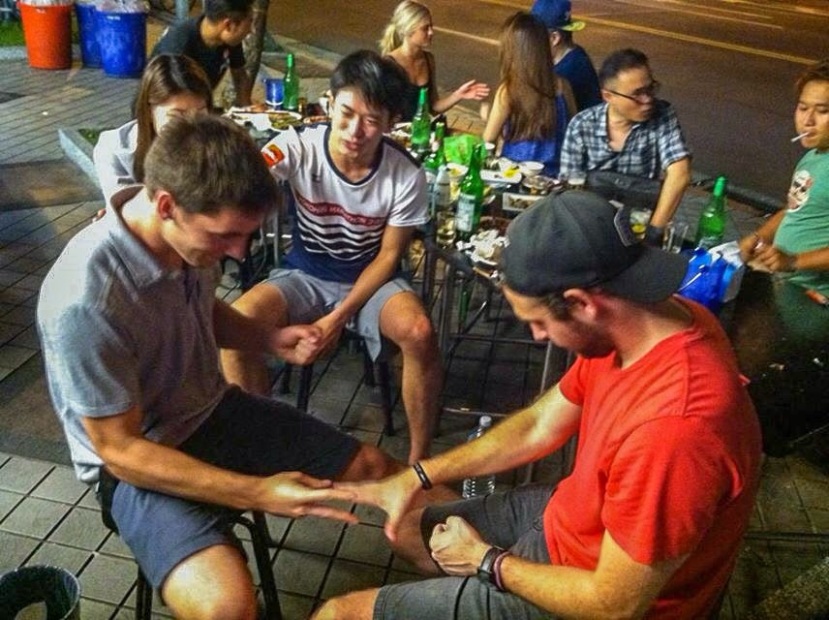 What an awesome week! We’ve loved having our families visit us over here. It’s been a blast introducing them to our Taiwanese life and the people in our lives. We will truly miss the people and places over here. 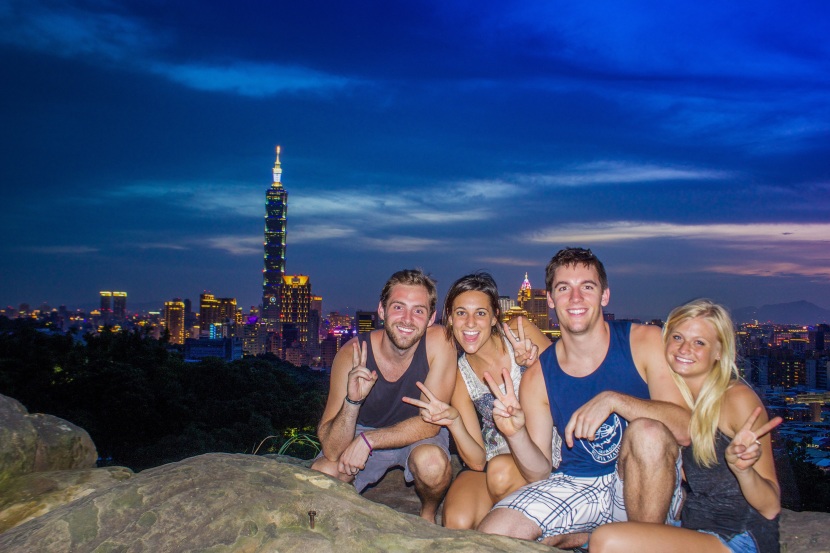 Stay tuned. I promise it won’t be six weeks again.