The end to our time in Taiwan was incredibly bittersweet. On one spectrum, we were very sad to be leaving the place we came to love, but on the other hand, we were GEEKED about our 2 month jaunt around Southeast and South Asia!
After waving goodbye to a group of our closest friends at Taipei’s Taoyuan International Airport, with our backpacks in hand, we were aboard a very cramped, direct AirAsia flight to stop number one…Indonesia!
Indonesia is, uncommonly known, the fourth largest country and has the highest Muslim population in the world. With over 18,000 islands, it’s a diver/snorkeler/layer outers dream come true. It was the perfect place for Sarah and me to start off our  summer of travel. She could tan the day away while I was able to revel in the underwater world with my favorite marine fish.

We flew into Denpasar International Airport on the super popular island of Bali. I visited Bali 5 years ago with my younger brother Jordan and his friend, Alec Green and we had the time our lives. I really wanted to share those experiences with Sarah, so we started in northern Bali in a place called Ubud. Have you ever read the book, “Eat, pray, Love?” In a nutshell, it talks about a girl who falls in love with an Italian guy while practicing yoga amidst the enchanting rice paddies that surround the villages in Ubud. My brother, Al, and I really regretted not going to Ubud last time, so I made it a point to visit this time. It did not disappoint! Southern Bali, especially the Kuta, Seminyak, and Legion areas are incredibly busy and don’t have a lot of local culture to experience, so Ubud was a great choice to start the trip.

It was about a 2 hour taxi ride north of the airport and we were dumped literally into the rice paddies. We spent the first 3 days in vacation mode…wandering through the paddies, watching the rice farmers gather their rice, laying out by the pool, and indulging in the native Nasi and Mie Goreng noodles. 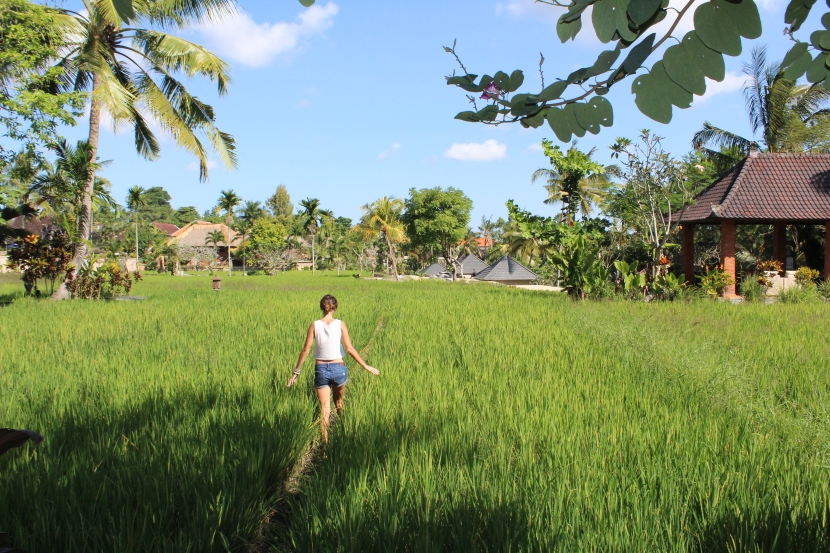 A highlight from the previous trip to Indonesia was the Gili Islands. Gili Trawangan, Gili Air, and Gili Meno make up the Gili Islands, which lie about a 2.5 hour boat ride from the eastern shore of Bali, or a 15-30 minute boat ride from Lombok. 5 years ago, these were off-the-beaten path, unspoiled islands. At the time, many locals lived on the largest island, Gili Trawangan, and us guys were excited to be on a slice of paradise that the hordes of travelers hadn’t discovered yet. I knew Sarah would love this place. We debated and debated on which island to stay on as the smaller two islands were very laid back with not much to do once the sun went down. Present day Gili T had lost its “untouched” luster a little bit as many new restaurants and guest houses had popped up over the past 5 years. We weighed the options and ultimately decided to stay on Gili T. Although we lost some culture, it offered more opportunities for dining and accommodation, but most importantly for me, was the night market.

Gili T is the only island with a night market run by the local people, serving freshly caught fish, and unique chicken and beef dishes. Every night was spent scarfing down the delicious Indonesian cuisine washed down with a Bintang brew discussing the two most asked questions in the backpacking world, “Where’ve you been?” and, “Where you off to next?” Where in reality, no one actually really cares, because they’ve probably been there or they’re heading there next. Same stories over and over! 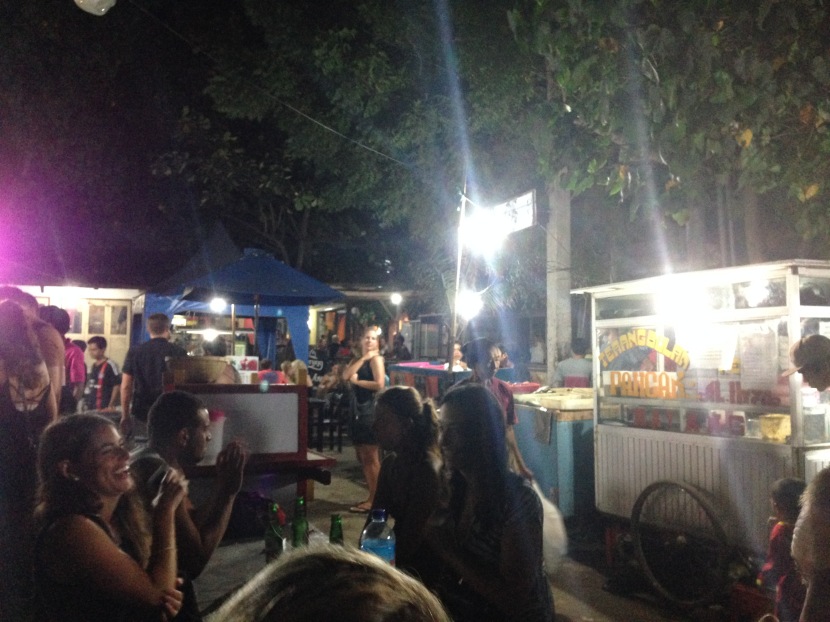 We spent our days snorkeling in what had to be one of the best off-the-beach reefs in the world. Just a few steps in the water and we were surrounded with fields of soft coral swaying to the waves, and colorful clownfish and moorish idols swimming through the mazes of hard stony coral. We even got to swim next to several majestic sea turtles!

We took one day to visit the smallest island of Gili Meno. The “port,” was very small and that was where all five of the island’s restaurants were located, with some upper class guesthouses surrounding. But once we walked 15 minutes farther down the beach, we could’ve been on our own private island in the South Pacific. It was unbelievable. We snorkeled among some of the finest reefs in the world with not a sole in sight…couldn’t beat that.

It wasn’t all paradise though. For the two months we were gone, we tried to stay within a budget of $30 dollars per night for accommodation. Now, that’s not that hard to do considering you can stay in a 40 person hostel dorm room for $6 per night, but do you want to be sleeping with 39 drunken people? Toss up. If you would’ve asked me 5 years ago, $6 a night was the the way to go – no matter what. Nonetheless, I’ve grown up a bit, and have really enjoyed having our own place. We used AirBnB whenever possible. Rather than your typical, sterile hotel room, AirBnB is a website where anyone can put their homes/vacation homes/treehouses/boats/castles up for rent. Sarah and I love to use AirBnB because it offers a true window into the lives of the local people. Instead of a one bedroom, one bathroom hotel room, we’ve stayed in 30th floor; three bedroom condo’s overlooking skylines of some of the biggest cities in Asia….all for a fraction of the price.

When places like the above didn’t work out or AirBnB didn’t have budget options, it was good ol’ hostelworld. We did our best to stay away from the dorms rooms and at least get our own room. This usually meant $30 for a board for a bed, giant cockroaches, and a mosque prayer playing over the loud speaker and an ear splitting level from 2-5AM EVERY single night…basically our experience on Gili T. Other than the hostel we stayed in, Gili T ruled. It’s one of our all-time favorite spots. The mixture of local culture, beach, ocean, and nightlife made for an incredible week. Indonesia is a must for anyone taking the hike to Southeast Asia.